There are about 51 different types, or species, of mosquitoes in Idaho. The differences between these species can be negligable, but at the same time, they can be quite dramatic. For instance, some species of mosquitoes never bite people, rather they prefer birds or amphibian hosts. Certain mosquito species prefer to feed during the daytime, while others feed at night. Regardless of these differences, all mosquito species have a similar life cycle that is dependent upon water.

When the adult female mosquito feeds, she ingests blood from the host animal. From this bloodmeal, the female is able to extract all the proteins and other nutrients required to produce 100 to 300 eggs. This process usually will take several days. So, after a mosquito feeds on a host, she will find a cool resting spot in which to convert this bloodmeal into eggs. These eggs are laid on or near bodies of water. 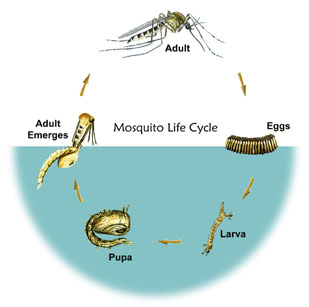 Various mosquito species have evolved to seek out and lay their eggs in specific locations. In general, mosquitoes of the genus Anopheles lay single eggs that float on the water's surface. Aedes mosquitoes also lay single eggs; however, their eggs aren't laid directly on the water's surface. They prefer to lay their eggs just above the water line. As the water level rises during flooding events, these eggs then hatch. Other mosquito species will lay groups or clusters of eggs, often called egg rafts. Culex mosquitoes, for example, lay egg rafts on the surface of the water. The larvae hatch from the eggs within hours and begin filter-feeding on decaying plant matter. Mosquito larvae are very active in their aquatic environments and have been called "wrigglers" because of their almost constant wriggling movements. Larvae breathe at the surface of the water through a specialized tube or siphon. They are constantly moving between the water's surface, where they breathe, and the water's bottom, where they feed. Within a few days to several months, they grow and pass through four stages or instars. This developmental time is influenced most greatly by water temperature. Colder water temperatures will slow larval development dramatically. The final, non-feeding larval stage is called the pupa.

Pupae are less mobile than larvae; however they can often be seen "tumbling" from the water's surface. Pupae, like larvae, breathe at the surface. While in the pupal stage, the mosquito larvae are changing or metamorphosing into the adult form, a process requiring several days to complete. The adult mosquito carefully emerges from the pupal case at the water's surface and immediately rests for several days to harden its outer cuticle.

Typically, male mosquitoes will emerge first and wait near the emergence area for the females to emerge. After the females emerge, they will mate with several males over the course of 2 to 3 days. This brief mating period is all that is required for the life of the female. About one week after emerging from the pupa, the adult females begin searching for a suitable host and subsequent bloodmeal. Between bloodmeals, the female feeds on nectar from flowers. This sugar meal is necessary for the mosquito to sustain herself. Although the male mosquito doesn't seek a bloodmeal, it does require a sugar meal for sustainance as well. The females seek successive bloodmeals about every 2 weeks throughout their life. Adult mosquitoes are alive for several weeks to several months, depending upon numerous environmental conditions.

More information related to mosquito biology can be found at the the American Mosquito Control Association of America's Website.